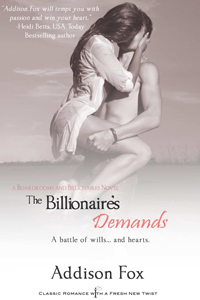 Booth Harrison has made a habit of getting what he wants, be it a new addition to the Harrison media empire, or a better relationship with his half-brother. But meeting his brother’s new sister-in-law, Camryn McBride, poses a new challenge. The savvy CFO of McBride Media has a brain he wants to pick…and a body he needs to claim.

Camryn has spent the past few years helping to rebuild her family’s magazine company, focusing on that rather than her disastrous personal life. But when Booth Harrison invites her to be the keynote speaker at a sales conference in Hawaii, she’s tempted to combine business with pleasure.

But meeting the billionaire’s demands won’t be easy, because someone doesn’t want a merger between them to happen.