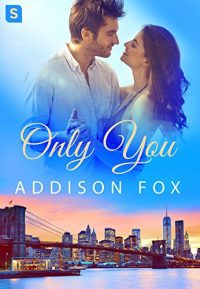 Meet the Brooklyn Brotherhood: three brothers who escaped rough childhoods in Park Heights, Brooklyn who grew into fiercely loyal, sexy men – and who find love when they’re least expecting it.

Fender Blackstone has kept the world at arm’s length, with the exception of his adoptive brothers and Mama Lou, the woman who saved him. Fender is willing to do everything he can to support Lou, but he finds himself drawn to Harlow Reynolds: the daughter of the woman who could destroy everything Lou has worked for.

Even without the emotional turmoil between their families, why would a woman from the highest echelons of Manhattan society ever look twice at a kid from Brooklyn? As forbidden sparks flare between them, Fender and Harlow realize there’s something real forming between them. When Fender’s past resurfaces and threatens the life he’s built, can his love for Harlow survive the aftermath?

Only You is an emotional story about love, and what it truly means to be a family.